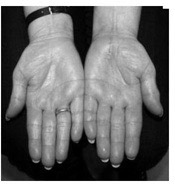 Complex regional pain syndrome (CRPS) is a chronic pain condition that is believed to be the result of dysfunction in the central or peripheral nervous systems.

(CRPS) is characterized by pain, swelling and stiffness in the affected hand or extremity. The pain may be out of proportion to the injury that triggered it. CRPS is usually associated with an injury, which can sometimes be as minor as a paper cut or small bruise.

It causes the nervous system to misfire and send frequent or constant signals to the brain that are interpreted as painful. The nervous system becomes overactive, causing intense burning or aching pain, along with swelling and changes in skin color and moisture.

It can begin after a minor injury, such as a sprain or small laceration, or after major trauma or surgery. Injury to a nerve may also provoke its onset. It is most common among individuals between 25 and 55 years of age, though anyone of any age can be affected. CRPS is three times more likely to occur in women than men. An estimated 3 to 6 million Americans suffer from CRPS.

The key symptoms of CRPS is continuous, intense pain out of proportion to the severity of the injury (if an injury has occurred). CRPS most often affects one of the extremities and is also often associated with:

There is no simple test to confirm a diagnosis of CRPS. The diagnosis is primarily through observation of signs and symptoms. Some patients may have a chronic physical problem, such as a compressed or entrapped nerve that needs to be addressed. Patients must be examined by a qualified physician who does a thorough history and physical examination. X-rays, MRI, EMG/NCV, bone scans, thermography, or pain imaging where available may be helpful. Consultation with other specialists may be needed, and often a pain clinic is recommended

The earlier that the diagnosis of CRPS is made and treatment started, the better the chance for full recovery. The treatment is varied and depends on both the severity of the symptoms and the duration of the problem. Aerobic conditioning, relief of sleep disorders, and treatment of psychological co-morbidities are critical to successful treatment.
Some patients may have a chronic physical problem, such as a compressed or entrapped nerve that needs to be addressed. Since there is no simple cure for CRPS, treatment is intended to relieve painful symptoms so that patients can resume their normal lives as well as optimize use of the hand or extremity. Any of the following may be employed to treat CRPS, often in combination:

An increasing exercise program to help with motion may help preserve or restore mobility and function to the affected hand. Overall aerobic conditioning is very important to improve coping ability, sleep, and pain control.

CRPS may have profound psychological effects on patients and their families. Many with CRPS suffer from depression, anxiety, or post-traumatic stress disorder. A psychologist or psychiatrist may be able to improve coping ability and motivation as well as detect and address any substance dependency issues.

Many patients experience significant relief from nerve blocks, in which local anesthetic is injected to numb nerves. By relieving pain, blocks can enable more effective therapy, improve mood, and level of activity. Stellate ganglion blocks may be used to numb the stellate ganglion, a cluster of sympathetic nerves at the base of the neck, in an effort to reduce the over-activity of the sympathetic nerves seen in CRPS (see Figure 1).

Many different drugs are used to treat CRPS and associated conditions, such as sleep disorders, depression, and anxiety. Medications may include topical analgesics, anti-seizure drugs, antidepressants, corticosteroids, muscle relaxants, opioids, and sleeping medications.

If the CRPS is from a compressed nerve, such as with carpal tunnel syndrome, then surgery to release pressure on the nerve may be needed (i.e. carpal tunnel release). Rarely, an operation known as sympathectomy is used to divide the sympathetic nerves in patients that are helped by nerve blocks, but its use is controversial. Other options include spinal cord stimulation and intrathecal drug pumps, in which pain medications are injected continuously into the space around the spinal cord. Deep brain stimulation and Electrotherapy (ECT) have also been used but new therapies continue to emerge.

© 2006 American Society for Surgery of the Hand